The history of Buckout Road

The Quakers, who were White, did not believe in
slavery. They believed that the act of slavery was non-
Christian and therefore freed their slaves between
1773 and 1783  and were given  land to farm in the
Stony Hill area in West Harrison by one of the Friends
(Quaker), Frederick Stephens. This predates the law of
1817 which stated that all African Americans in New
York State who were born before July 4, 1799 would be
free as of July 4, 1827.In the first U.S. Census Report of the year 1790, the
Township of Harrison was listed as having a population
of 1,156, including 54 slaves.  The area known as Stony
Hill is located on Buckout Road. This area was the site
of the largest population of African Americans in
Westchester County at the time (which at the time
included parts of The Bronx).  Stony Hill cemetery is
part of this area, as are two stone buildings which are
in the woods off of Buckout Road. Stony Hill cemetery
holds the remains of freed slaves as well as Black war
veterans. The 1867 FW Beers Atlas shows that the Hills
community included a school and a church.The
cemetery was allegedly first listed in 1983 as historic
site by the Westchester Historical Society, however a
sign marking the cemetery didn’t arrive until 1999, 16
years later. 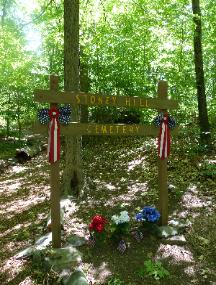 There  was a two day battle between the Colonists
and the Redcoats at The Horton Grist Mill off of
Lake Street (a few blocks from Buckout Road) in
White Plains during the Revolutionary War.  British
troops attempted to raid George Washington’s
supplies which was stored at the nearby mill.
George Washington made his headquarters at the
Jacob Purdy house a few miles away.Several members of the Buckhout family fought in
the war.  Troops were encamped on one of the
Buckhout’s farms.  General William Heath utilized
the home of Gilbert Hatfield on (what is now) Hall
Ave as a headquarters in November 1776.

In my book, find out about how a Buckhout woman
was killed by a troop and what led to her one
armed lover being brutally murdered and hacked to
pieces.  Plus the real people which served as
inspiration for several of Washington Irving’s
characters for The Legend of Sleepy Hollow,  the
story of Major Andre’s capture, the connection
between the Buckhouts and George Washington’s
headquarters, and more.

On New Years Day 1870 a member of the Buckhout family committed a gruesome murder in the infamous nearby
town of Sleepy Hollow.   Isaac Van Wart Buckhout was named after one of the heroic men that apprehended Major
Andre.  Isaac married Ann Louisa Coope in 1860, however their marriage was not a happy one. Isaac consistently
thought his wife was being unfaithful and two of the individuals he suspected was his hunting buddy and neighbor
Alfred Rendall and his son Charles.On New Years Day 1870,  Alfred and Charles were guests at the Buckhout home.   As Ann Louisa was in the kitchen,
Alfred and Charles enjoyed a glass of cider in the living room area of the Buckhout home.   Isaac then excused
himself to the bedroom and returned with a shotgun.   He stood in the doorway of the room and fired at Alfred
Rendall, killing him.  He then swung the gun around and emptied the second barrel at Charles.  Part of the charge hit
him in the left side of the head, which broke the glass goblet which he was drinking from.  Glass shattered with
pieces embedded in his eye and forehead, leaving him blinded in one eye and covered in blood.  Isaac then went into
the kitchen where he beat his wife to death with the gun, crushing her skull and breaking the gun.  Isaac fled.
Moments later a confused Charles staggered to the body of his father, shook him, but he was gone.

Dubbed “The Mad Murderer of Sleepy Hollow” Isaac was jailed and later hanged for his crimes following multiple
trials in White Plains.

My book devotes a lengthy chapter to this incident which includes a ton of details including stories of his life, his
theory that Westchester County was under masonic control, his time in the White Plains jail which includes a
suicide attempt and him claiming to see ghosts in his cell.   My book also has quotes from Isaac on the murders, his
explanation for his actions, and detailed information on the Buckhout family which connects him to members of the
family that lived and are buried on Buckout Road. The book also details Isaac’s last days, his interaction with his
brother Benjamin at the gallows, his burial, and more.

If you’ve traveled on Buckout Road, it’s likely you’ve seen the pictured sign for
Baldwin Farm and perhaps wondered just what the hell is that. There’s a sign
that says “farm” but there is no actual farm. And just what is a “community
garden”.There was a farm there which dates back to the 1700’s and was the last
remaining active farm in White Plains until the 1970’s.

Originally called Pine Tree Farm it was owned by the Foster family.  John Foster
and his wife Elizabeth Marsh Foster had nearly a dozen children and the farm
was passed down through the generations. The property once extended for 22
acres which includes a small cemetery; the one on Buckout Road where John
Buckhout’s grave is.  The cemetery was originally the Foster’s family burial
ground.  There are over 50 people including children buried in that small
cemetery.

John & Elizabeth Foster had four daughters.  Deborah Foster married a man
named Frederick Stephens. They were Quakers who helped illegally free
slaves that resided in the area and gave them land to live on.  Pretty heroic.
Frederick’s buried in the aforementioned cemetery on Buckout Road yet his
gravestone was stolen and never replaced.  Again, this man helped free slaves
and his gravestone was stolen and never replaced by the city of White Plains
which owns the cemetery. Digest that.

Another Foster daughter, Elizabeth Ann married a carpenter named John
Quincy Adams Buckhout.  Their son is John Foster Buckhout. They are also
buried in that cemetery, the latter is the only remaining grave stone.

The farm remained in the family for generations with James Foster and his
wife Mary becoming eventual owners. After James’ death, Mary sold the farm
to their daughter Sarah and her husband Horace Baldwin in 1863. It was was
renamed Baldwin Farm and the family farming tradition continued.

In 1971 an arson fire burned down two of the barns. No arrests were made.

The city of White Plains purchased the property for $300,000 in 1973 with the
intention of turning it into a park. Clearly that’s a work in progress.

The last ‘Farmer Baldwin’, David, remained living on the property until his death
in 1979.  David grew up in White Plains, attended Eastview School in the early
1900’s and played baseball on a team called The Hilltops. He spent his life
caring for his animals. After his death, he donated all his possessions to the
Presbyterian Church of White Plains which included 15 cows, 90 chickens,
furniture, and farm equipment.

In 1982 the farm was completely destroyed by another arson fire. No arrests
were made. .In spite of the city of White Plains purchasing the 22 acre farm
located at 500 Hall Avenue for $300,000 in 1974 to be used as a park, it has
been largely undeveloped except for a few community gardens.

In 2016 twenty nine goats were “hired” to live on the farm land for several
months. They were “employed” to remove overgrowth, including poison ivy.
The farm’s temporary residents made local News 12 cable news after some
managed to escape from their fenced-in enclosure.

Much more on the Fosters and Baldwins in my book including a look into the life
of the last ‘Farmer Baldwin’ including first hand information from his former
neighbors and the junior high school student that found his body. Mary Foster
was said to have hanged herself in the nearby Quaker church. Allegedly her
ghost haunts the family cemetery.

For any Buckout Road urban legend ghost hunters, Baldwin Farm is not the
Buckout Rd farm with the infamous slaughter house. It’s also not the Buckout
Road  “Experimental Farm” which made national headlines in the 1950’s.
More on that stuff in my book.

Located where Hall Avenue becomes Buckout Road
sits the grave of John F Buckhout and his wife
Charlotte Cowan Buckhout.   As the grave sticks as
the only one in the cemetery, rumors have persisted
for years as to who the man who died in 1915 was.
Rumors of him being a slave owner and a murderer
are false.  You can read the truth about John
Buckhout and who he and his wife were in the book.In the late 1970’s there was a ghoulish raid on the
cemetery.  Gravestones were stolen and the there
were freshly dug holes in the cemetery.  Police
investigated and theorized that the corpses of John
and Charlotte Buckhout may have been stolen!
The book recaps the incident with quotes from
Buckhout descendants and the police’s utterly
shocking theory as to why the corpses were stolen.

Many have claimed to have had ghostly experiences
at this small cemetery.  Photographs often capture
what may be orbs and plasmas.  The road where the
cemetery is located used to be a steep hill before
2001 construction leveled it.  Rumor was it was a
‘gravity hill’; if you put the car in neutral, the car
would move itself over the hill.

This small cemetery was once owned by the Foster
family.  The Foster Buckhout burial ground is
property of the city of White Plains yet you may
notice that there’s only one grave stone in it.  The
more puzzling part is that over 50 people are buried
here, and there’s no markers because they were all
stolen or removed. 22 of those buried in the
cemetery died before the age of 20, some were just
small children.

The White Plains Historical Society has stated
numerous times dating back to 2001 that a
memorial would be placed in the cemetery to
recognize those buried there, however that hasn’t
happened.

Perhaps something can be done?