Rapper Shaq Daddy performed part of his song “She Thirsty” on the On Deck segment hosted by The
Drunken Swashbuckler and Destiny.  His song was interrupted by Vanity whom had some choice words for
her opponent Angel Dust whom she was forced to team with via luck of the draw at Bombshells #8 during
the opening round of the Majestic Twelve Tournament.  The highly popular Ohio pixie Angel Dust quickly
made her way to the ring and after a back and forth battle was victorious in scoring the pin on Vanity.

In a match in which fans are already referring to as a 2014 Match Of The Year candidate Serena Deeb
defeated Mia Yim in their first ever meeting in an epic nearly 20 minute back and forth hard hitting match up
where both competitors showed their mutual respect of each other.

On Deck with TDS & Destiny returned next with guest Jen Cruz whom is still winless at Bombshells.
Commissioner Vinny Finucci entered and made Chasity Taylor his new assistant, much to her surprise.
Finucci went on to verbally molest Cruz for several minutes to the shock of the crowd.  Cruz’s opponent
Cristina Diamond entered , however before the match could begin Finucci appointed Chasity as the guest
referee.   Cristina Diamond defeated Jen Cruz and in spite of being aligned with the heel commissioner had
a very large cheering section..

Hania The Howling Huntress defeated Sienna Duvall, Sumie Sakai, and Mistress Belmont in a Fiesty Four
Way Match after scoring the pinfall on Sumie.   The popular Hania was quickly met in the ring by S.I.N.
members Rodriguez & Kaye whom offered Hania membership into their group.  Shockingly Hania accepted.

Missy Sampson defeated Amber Rodriguez to retain The PWS Bombshells Heavyweight Title.  This hard
hitting match saw run ins by Jessie Kaye, Hania hit the ring to help Rodriguez cheat her way to a title win.
Taeler Hendrix hit the ring trying to help Missy whom helped her earlier in the night.  Taeler and Hania
brawled to the back.   With Jessie & Amber having the upper hand on Missy,  La Rosa Negra hit the ring and
instructed Jessie & Amber to hold Missy.    La Rosa whom has been violently feuding with Missy for the past
year shockingly hit Jessie Kaye as Missy broke free and attacked Amber leading to a pinfall victory.  La
Rosa explained that while she has had her differences with Missy, she has respect for her.

What will happen next time at Bombshells?  S.I.N. has now grown to four members with Hania joining the
ranks while La Rosa has turned into a fan favorite standing beside Missy.  Will there be more shocking
swerves?  Stay tuned. 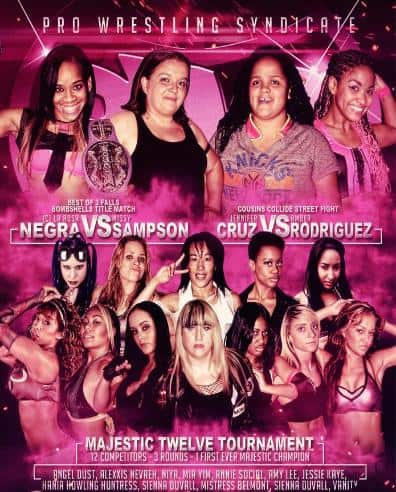