Part One – The Native Americans
Buckout Road connects the eastern part of White Plains, NY to West Harrison, NY. Majority of the road is in the town of Harrison.

The town of Harrison, known for the Fortune 500 companies Pepsico and IBM Corp which are based there,  claims a guy
named Charles Dawson was their first historian. According to Dawson, the area was originally inhabited by a tribe called
Siwanoy who allegedly sold the land which is currently the town of Harrison to two men from Greenwich, Connecticut; Peter
Disbrow and John Budd in 1666, and again to a Long Island Quaker named John Harrison in 1695.

Apparently there was some sort of technicality as Disbrow and Budd didn’t file the proper paper work with the government of
New York, but Harrison did.  There is no record as to what the Siwanoy received in return for their land and it should also be
noted that there were high tensions between Dutch settlers and the Siwanoy within Westchester County including an incident in
1643 when Siwanoys destroyed a Dutch settlement in nearby Pelham Bay which included Siwanoy chief Wampage scalping
Anne Hutchinson. Earlier that year, Dutch settlers throughout New Amsterdam (now known as New York) launched attacks on
Native Americans. A book called “The History Of The City Of Brooklyn” published in 1867 describes the Natives were
remorselessly butchered. The bloodshed was climaxed by John Underhill’s raid on a a Siwanoy village near present-day
Bedford in 1644, effectively crushing Native American  resistance. On August 30, 1645, a general peace treaty was signed
between the Dutch and Natives of the Hudson Valley area. War casualties, combined with the diseases brought by the
Europeans, greatly diminished the Native population. While Natives remained for years on the lands they had sold, they
gradually disappeared.

By 1800 there were very few still living in Westchester County. One can only speculate as to whether or not there are Native
American burial grounds on Buckout Road as there are no records indicating either way; mind you there are several cemeteries
on Buckout Road which were not marked as such until a few years ago!

John Harrison sold the land of Harrison along with four others who were involved with him in the original purchase to
Quakers in 1727. The Quakers built there first meeting house in 1727 (which was later burned down and a replica was put
up on the same foundation but was also burned down on January 1, 1973). According to the Westchester Historical Society’s
website, the Quaker meeting house is/was located on Buckout Rd.

The Quakers, who were White, did not believe in slavery. They believed that the act of slavery was non-Christian and therefore
freed their slaves between 1773 and 1783  and were given  land to farm in the Stony Hill area in West Harrison by one of the
Friends (Quaker), Frederick Stephens. This predates the law of 1817 which stated that all African Americans in New York
State who were born before July 4, 1799 would be free as of July 4, 1827.

In the first U.S. Census Report of the year 1790, the Township of Harrison was listed as having a population of 1,156,
including 54 slaves.  The area known as Stony Hill is located on Buckout Road. This area was the site of the largest
population of African Americans in Westchester County at the time (which at the time included parts of The Bronx).  Stony Hill
cemetery is part of this area, as are two stone buildings which are in the woods off of Buckout Road. Stony Hill cemetery
holds the remains of freed slaves as well as Black war veterans. The 1867 FW Beers Atlas shows that the Hills community
included a school and a church. The Church, now known as the Mount Hope Zion Church of White Plains, is still standing.
The Hills community existed into the 1930’s. The cemetery was never marked until 1999 when a sign reading “Stony Hill
Cemetery” was erected off of Buckout Road.  I first stumbled (literally) upon the cemetery in 1995 when my friend Alex and I
were walking in the woods. The cemetery holds the remains of over 200 people and spans about 6.5 acres. The cemetery
was allegedly first listed in 1983 as historic site by the Westchester Historical Society, however a sign marking the cemetery
didn’t arrive until 1999, 16 years later. .

There  was a two day battle between the Colonists and the Redcoats at The Horton Grist Mill off of Lake Street (a few blocks
from Buckout Road)  during the Revolutionary War.  John Horton who owned the Mill had purchased the area of West
Harrison known as St Mary’s Lake (now Silver Lake) in 1732.  British troops attempted to raid George Washington’s supplies
which was stored in the Mill.  George Washington made his headquarters at the Jacob Purdy house a few miles away.  (As a
side note Buckhouts married in to the Purdy family, more on that later).
There  were most likely casualties of the Revolutionary War in the vicinity of and probably on what is currently known as
Buckout Road. 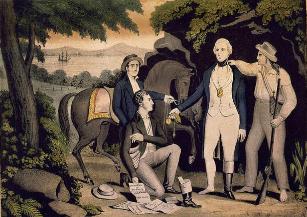 Shortly before 1700, Captain John Buckhout settled near the Hudson river in the town of Irvington and established a farm.
During the Revolution, British and Hessian soldiers were encamped on Buckhout farm after the Battle of White Plains in
October 1776.British spy Major Andre was captured and hanged in a nearby town after he was found with documents from US General
Benedict Arnold. By  war’s end, according to Washington Irving’s (author of The Legend Of Sleep Hollow amongst other things)
history, hardly a tree, fence or building was left standing in this vicinity.

Majority of the soldiers who fought in the infamous Battle Of White Plains were residents of The Hills community and are
buried in the Stony Hill Cemetery on Buckout Road.

Part IV: Into the 1800s:  Pine Tree Farm, The Underground Railroad, a Casino, and a Ski Jump

A farmer named James Foster purchased property in 1823 and built his home on Hall Ave. Hall Ave turns into Buckout Road
(it’s the same road, no turns). Foster called his home Pine Tree Farm, which served as a site for the birth of three
generations of Fosters who continued the family farming tradition. Sarah Foster married a man named Horace Baldwin who
took over the farm after the last male Foster, James, passed away. The farm was renamed Baldwin Farm and continued for
several generations.

John Horton, who owned the land  of Western Harrison (also known as Silver Lake), sold it to a man named Mr Underhilll in
1833. In 1861 the Quarry Heights section of West Harrison, near Buckout Road became a stop on the Underground Railroad
taking slaves to freedom. A railroad station was built in 1870.

A few years later is when people had begun seeing the infamous Leatherman roaming around the Buckout woods.
Some locals have claimed to have seen the apparition of infamous The Leatherman near Pop’s Cave on Buckout Rd.   Pop’s Cave was used
during the Revolutionary War to store ammunition and it was the reported hangout for “The Leatherman” when he roamed through the area in
the 1880s.  Jules Bourgalay was born in France and fell in love with a woman named Margarette Larson who’s family owned a leather business
there. Mr Larson was against his daughter dating Jules, so Jules agreed to work for him for one year free of charge to prove himself worthy. If
after one year of free labor Mr Larson did not gain approval of Jules, then he would leave. A year later, Jules left France and headed to the US
by boat.  He  became known as “The Leatherman”  and was first sighted in CT in 1862. He was a wandering hobo who frequented the Buckout
woods before passing in March 1889, in Mount Pleasant, N.Y., after cancer ate away his mouth and jaw. The coroner’s report indicated he was
50 to 55 years old. The Leatherman was said to a bone comb and rosary wherever he went and also frequented a cave in the near by Saw Mill
River Woods. Rumors still continue to circulate that Bourglay buried money in one of these two locations and some have claimed that they
have been confronted by either Leatherman’s ghost or a Leatherman double.

Underhill then sold the land to a Mr Gainsborg in the 1890’s. Gainsborg developed early Western Harrison into a resort area
which included a hotel, casino, and an internationally known ski jump.

By this time the population of Harrison was listed as 1,494.

In 1971 there was a fire at Baldwin Farm which destroyed two of the barns, injured horses and killed a cow. A vandal was said to
be responsible for the blaze.

The last Baldwin farmer died in 1979 at which point the city of White Plains purchased the land and prepared to restore the farm
for educational use. The body of Farmer Baldwin  was found by Wayne Slaughter as he was walking home from Eastview Junior
High School in White Plains. Baldwin was layed out in a cross shape in front of the front porch, eyes open, gone. People who grew
up in the area at the time told me it was widely thought that Baldwin had mental illnesses and was insane. He was often seen
talking to himself and cursing children. Baldwin apparently had a lot of”weird geometric” drawings in his house which contained
no furniture.

Vandals struck again and in August 1982 the farmhouse was burned to the ground. The Baldwin farmland is currently opened
during the day time and is used as a community garden where residents can go and grow crops. During all of my experiences
going there during the day time, I have seen only construction workers leaning against their trucks eating sandwiches.