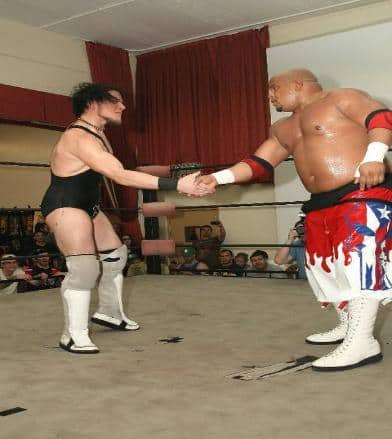 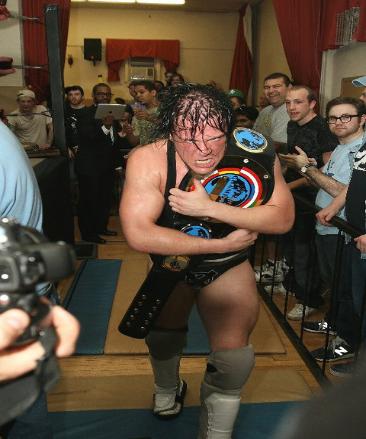 On Friday night May 27, 2011 “The New Horror” Sami Callihan stepped into a sold out Queens Elks Lodge to
battle “The Boricua Beast” Dan Maff in a No Disqualification / Falls Count Anywhere Match as made by Guest
Commissioner Mick Foley.

After a very intense battle between these two warriors which included a tables, chairs, and lots of stiff shots it
was Sami who came out on top.   The stipulation for this match was that the winner would receive a PWS Title
shot against champion Devon Moore of Reality Check.

In a shocking turn of events while Sami was worn out in the ring, Moore came out to cash in his title defense!
After Moore hit a huge piledriver, Sami was surely done .. until he put his shoulder up and the crowd erupted.

The action continued back and forth and ref Brett Lauderdale was knocked out in the process.  This led to
Reality Check’s Danny Demanto coming to assist Moore, however Demanto was immediately stopped by Dan
Maff whom hit a huge Burning Hammer on Demanto, laying him out!    Sami quickly capitalized and had Moore
beat in the center of the ring.  Ref Matt Bennett quickly made a sprint towards the ring but was pulled out by
Reality Check’s Kevin Matthews.   Before Matthews could get into the ring to help Moore,  Commissioner Mick
Foley was on the scene, but so was Reality Check’s Velvet Sky whom Foley had fired earlier in the night.  Foley
made quick work of Matthews and then applied Mr Socko to Velvet Sky while Sami applied his Stretch Muffler
submission to Moore in the middle of the ring.  With nowhere to go, the Two Time PWS Champion was
screaming in pain and had no choice but to tap out.   Foley called from the bell and the crowd was on their feet
to celebrate their new champion “The New Horror” Sami Callihan whom was first seen in PWS in 2009.